Maliseet Nation Conservation Council (MNCC) is an Aboriginal organization established under the Department of Fisheires and Oceans (DFO) AAROM program. We represent all six Maliseet First Nations (Madawaska, Tobique, Woodstock, Kingsclear, St. Mary’s and Oromocto First Nations) in the province of New Brunswick. It was first established in 2004 to collaborate on the management of aquatic resources and increase Maliseet First Nation participation in watershed management within our traditional territory, the Wolastoq (Saint John River) watershed and Bay of Fundy.

One of the MNCC’s major conservation missions is Species at Risk (SAR) program, which both gathers SAR data and builds stewardship capacity within our member communities. The program addresses vital issues pertaining to SAR in the trans-border watershed level. Over the past a few years, MNCC has collected, processed and preserved Aboriginal Traditional Knowledge (ATK) of Maliseet First Nations (MFN) that are useful for conservation SAR. MNCC has been running a trans-boundary process to formulate a management strategy for the Wolastoq since 2004 in collaboration with rights and stakeholders of the river in Canada and United States (US). We have so far conducted 3 cross boundary summits in Maine, Kingsclear and Madawaska and recently the process was officially recognized by federal agencies of Canada and US.

McIntosh Brook is a tributary to the Saint John River at Kingsclear, New Brunswick and former salmon habitat. There were three manmade structures (old concrete dam at the mouth and the culverts under the walking trail and route 102) on the stream impeding upstream fish passage. It was estimated that more than 33 000m2 of good quality spawning’ and rearing habitat would be available for salmon if passage is provided at these three locations.

In 2013, MNCC in collaboration with the Fredericton Fish and Game Association (FFGA) dismantled the old concrete dam at the mouth of the brook which immediately provided fish access to 2500 m2 of good quality stream habitat. Atlantic Salmon Conservation Foundation (ASCF) and the RTP Developments Ltd. provided necessary funds to conduct the project.

ln summer 20I7, MNCC in collaboration with our project partners (FFGA and City of Fredericton) dismantled the culvert under the walking trail on the Mclntosh Brook to address the second fish passage problem. This project was funded by the DFO’s Recreational Fisheries Conservation Partnerships Program (RFCPP) and the City of Fredericton. Total cost of the project was approximately $235,000, with MNCC and FFGA covering $100,000 and the additional $135,000 was budgeted as part of the City’s 2016/2017 Capital Budget. The current program phase included the removal of the deteriorated culvert under the walking trail and the enhancement of the stream bottom to improve fish passage.

MNCC has conducted fish population assessments in the enhanced area of the McIntosh Brook (2016 and 17) to evaluate impact of the project on resident populations. The assessments were conducted downstream of the two culverts assuming upstream fish passage is completely blocked by the culverts. Seven species of fish were caught during the fish population survey conducted in the brook in 2016. The study indicated that Blacknose dace was the most abundant-fish (density=37.2 fish/1OOm2 while Burbot was the least abundant in the fish fauna (density=1.3 fish/100 m2). The estimated densities for Brook trout, Atlantic Salmon, Rainbow trout and American eel were 3.4, 5.3, 1.4 and 13.3 fish/100m2 respectively. . It is important to note that there was another impediment for upstream migrating fish on the brook; the malfunctioning culvert under the route 102.

Recently concluded fish habitat assessment in the Mclntosh Brook indicated that except for light to moderate erosion, fish habitat in the brook (upstream of route 102) was undisturbed to great extent. The brook’s water quality was favorable for the long-term existence of cold-water fish, which included plenty of pools and cover. The salmon habitat in the brook upstream of the culvert was estimated to be around 30,000 m2.

Currently, MNCC is working with the Department of’ Transportation and Infrastructure of the Province of New Brunswick to address fish passage problem at the culvert under route 102. It is important to note this watercourse is located downstream of all of the power dams on the Wolastoq (Saint John River). Therefore, the smolts produced through this project will not be subjected to mortality from power turbines. 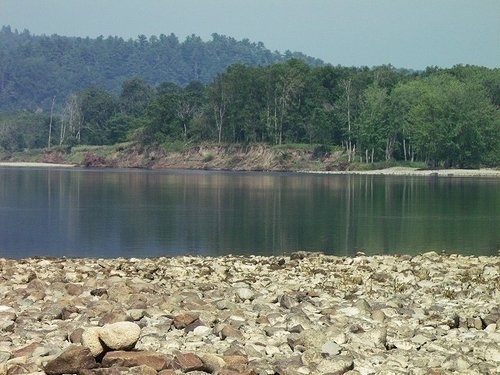 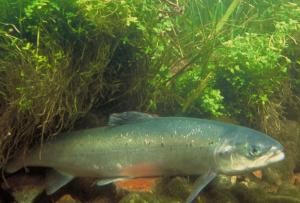